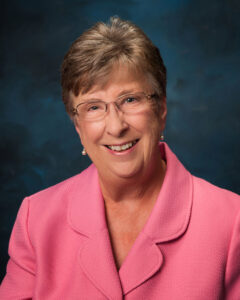 I grew up in Ashkum, IL. I came to Mount St. Scholastica College with the hopes of studying Spanish and working in the Peace Corps and then as a diplomat. Upon arriving at the college I fell in love with the sisters and with the chanting of the divine office. I entered the community after one year of college. Upon graduating with a degree in elementary education (and a minor in Spanish) I began teaching and then attended the University of Nebraska, Lincoln, where I earned a degree in educational administration. I served as a teacher and principal in Catholic schools in Missouri, Nebraska, and Kansas before becoming associate superintendent of schools for the Diocese of Kansas City-St. Joseph. In 2003 I was asked by the community to found and serve as Director of Keeler Women’s Center where I served until accepting the position of Director of Sophia Spirituality Center in 2016. In my free time, I enjoy my flower garden and reading mysteries by Scandinavian authors.