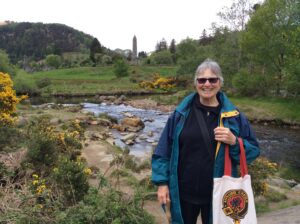 Since 1984, my work has been mostly in spiritual ministry: spiritual direction, teaching and leading retreats. The areas of most concentration have been contemplative prayer, the mystics, dreamwork, the Enneagram, and Benedictine spirituality. I’ve led classes and retreats on these topics at Sophia Center and at various retreat houses across the country. It’s more than true to say that I have profited more from this experience than perhaps anyone who has attended!

I was appointed an oblate director in 1991 and began forming a community of oblates in Kansas City, Missouri. Over the next ten years, these groups, or deaneries, grew to four in number. A few years ago, another group – whose director became infirm – was added to my list, making it five oblate deaneries. I’m ever grateful for the opportunity to work with oblates as they’ve taught me so much about living the Rule of St. Benedict.

In 1994, I met Esther de Waal when she attended a symposium at the Mount. She and I began talking and, when she discovered I have Irish roots, she encouraged me to learn about my Celtic heritage. We began planning a pilgrimage to Ireland, which inaugurated another area of my ministry. Esther mentored me for the first 4-5 years, during which I learned enough to be set on my own path to leadership of these pilgrimages. For the next 23 years, I led pilgrims to Ireland, Scotland and Wales. In addition, I began traveling and leading Celtic retreats. 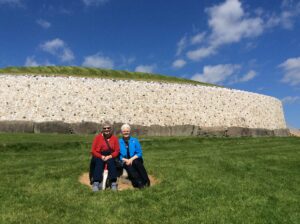 I feel greatly blessed to have been led into spiritual ministry. It has allowed me to meet other seekers on a deeply moving level. As they’ve shared their deepest experiences of God with me, I’ve come to a deeper awe of the way in which God’s love is present and acting.

Many women who are not in vowed life do what I do in guiding others on the spiritual path.  Is my ministry different because I’m a vowed Benedictine?  Because I only know how influential, even necessary, the effect of living the Benedictine life has had on my ministry, I respond from that stance.

I’m led each day through the praying of the psalms to allow them to take root in me. The daily practice of lectio divina offers immersion in the Word of God, so that it can continue to call and support me throughout the day. I can’t imagine not having these practices (gifts) in my life! They make it possible for the images and words of Scripture to sensitize me for every encounter I have in my ministry. These are continual reminders to be present with deep listening. Life with others under the Rule of Benedict teaches me stability, the ability to live with others and – every day – calls me to selflessness.