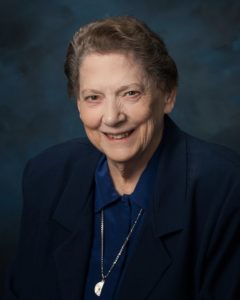 Sister Johnette Putnam, OSB, 84, a Benedictine sister of Mount St. Scholastica, Atchison, Kans., died Sunday, February 4, 2018, at the monastery. The vigil service will be Thursday, February 8, at 7:00 p.m. in the monastery chapel and the Mass of Resurrection will be celebrated there Friday, February 9, at 10:30 a.m.

Born in New Orleans, La., Sister Johnette was a member of St. Scholastica Priory in Covington, La., until it closed in 1988 and she transferred to Mount St. Scholastica in Atchison. She taught in grade schools in Louisiana and was a principal for several years. From 1958 to 1968, she taught at St. Joseph High School in Chauvin, La., and St. Scholastica Academy in Covington, La. She held a B.A. in English from Mount St. Scholastica College, M.A. in theology from St. John’s University in Collegeville, Minn., and an honorary doctorate from Mount Marty College in Yankton, S.D. In 1968, she was elected prioress in Covington and in 1978 became president of the Federation of St. Scholastica, an organization of Benedictine monasteries. She held this position for 12 years and then was a retreat director at Sacred Heart Monastery in Cullman, Ala., before moving to Atchison. There she served as director of Sophia Center from 1992 to 2003 and helped launch Souljourners, an ecumenical program for training spiritual directors at Sophia Center. She wrote many articles and gave lectures and workshops on monastic life, community leadership, liturgy, and spirituality.

Sister Johnette was preceded in death by her parents Gorham and Georgiana Serpas Putnam, by her brothers Charles, Joseph and S. Jerome, and a sister, Emilie Nicaud. She is survived by her twin brother John (Dot) of Tierra Verde, Fla., nieces and nephews, and her monastic family. Arensberg Pruett Funeral Home (www.arensbergpruett.com) is in charge of arrangements. Memorials may be sent to Mount St. Scholastica or made online at the Mount’s web site (www.mountosb.org).

Sixty-nine years is a long time to have known someone, especially when for a large number of those years, you lived and worked closely together in community and in deep friendship. So I want first to thank Sister Esther and the community for the honor of giving this eulogy, for the chance to stand next to Sister Johnette this last time.

Gerard Manley Hopkins, in his poem “Binsey Poplars,” has a line, and I quote: “Aftercomers cannot know the beauty been.” Johnette was about 60 years old when she became a member of the Mount community, bringing with her a life that had been filled with accomplishments, and with love, and, yes, with pain. No one here could be expected to know all that. Certainly, you saw something of her accomplishments in her work at Sophia, but then in these last years, you saw mostly one on whom age and deep sorrow took its sad toll. So I would like to try to share with you a bit of the “beauty been.”

In the second reading this evening, St. Paul writes, “According to the grace of God given to me, like a skilled master builder I laid a foundation.” There is no need to list all Johnette’s accomplishments, as you can read about most of those in her obituary. What can’t be noted there is how she depended on God’s grace to be able to do all that went into them. In the community, she was known for her capabilities. Superiors knew she could be counted on. At age 20, when the principal of the school became ill, Johnette was asked to replace her, and she remained in that position. In her late 20’s, she was sent with two other sisters, considerately older than she, to establish a high school in the bayou country of Louisiana. There, because of distance, they were isolated from the community. Add to that difficulty that the superior was, shall we say, not at all easy to live with.

She was a favorite English teacher at our academy, but this was during the hard years of the struggle for integration. While she worked for changes in the Covington community, her brother, Joe, was fighting against racism in New Orleans, and both of them for that were often dismissed by the white community with the awful name I will not repeat here.

Then there were her years as Prioress and later President of the Federation for two terms. Both of these were during the years following Vatican II, and most of you here know the turmoil that they held. Being Prioress of an aging community was no easy task and Johnette relied on the grace of God and the gift of wisdom for the strength it needed.

Through it all she kept “hold of wisdom”, never letting her go. Her tenacity as she worked through the many difficulties behind all her accomplishments was due to that. From her early years in community, she was recognized as a woman of prayer with a special devotion to the Divine Office. As the first reading states, she trusted the wisdom that came with prayer to guard her. Then the pain that I mentioned. I doubt that many here know that Johnette suffered five unexpected deaths in her family in a rather short time. I will not go into detail about them, but I must note that these losses were capped ultimately by the loss of community she loved and had been with since she was 15 years old, a loss so deep aftercomers cannot begin to imagine. When these happened, Johnette bore them with her usual faith and trust in God, and continued her vowed Benedictine life which she so loved here with you. Perhaps, I wonder,if it was not the pain of those losses that took hold as she grew elderly and infirm.

I mentioned love. It is important to remember that we were a small community and along with Johnette, many of us were very young. So we literally grew up together in community, with all the endearment but also with the mischief that belongs to youth. Johnette, so serious about her duties, was the favorite receiver of our mischief. You’ll hear some of those stories later. But she was also the darling, both model and friend to us, the dear of our hearts. And not only to us, but to her family, especially her twin, John, who, unable to be here, mourns with us. I do want to mention that she had become like a member of my family and they, too, all mourn her death. To borrow from and paraphrase another poet, I would say, “And, oh, all of our hearts how we loved her.”

Through her years of teaching it was evident that her students and those with whom she worked loved her. Still after all these years, former students ask about her and remember how she was so special to them. After the obituary appeared in the paper, my phone rang many times. I would like to use a quote from the Nobel prize winning trilogy, Kristen Lavrensdatter, by Sigrid Undstet, to close these sparse reflections. It comes at the end when Kristin is dying after a very full life of hardships and change. She considers the mark on her finger where her ring had been. It reads:

:…and the last clear thought that formed in her brain was that she should die ere this mark had time to vanish, and she was glad. It seemed to her to be a mystery that she could not fathom, but which she knew most surely nonetheless, that God had held her fast in a covenant made for her without her knowledge by a love poured out on her richly, and in despite of her self-will, in despite of her earthbound spirit, somewhat of this love had become a part of her, had wrought in her like sunlight in the earth, had brought forth increase which even the hottest flames of fleshly love nor its wildest bursts of wrath could lay waste wholly. A handmaiden of God she had been—a wayward, unruly servant, slothful and neglectful, impatient with correction, but little constant in her deeds—yet had he held her fast in his service, and under the glittering, golden ring, a mark had been set secretly on her finger, showing that she was his handmaiden, owned by the Lord and King who was now coming.”

Now He has come again, and taken Johnette—this wayward, unruly servant, but this handmaiden of God— to himself, so that where He is, she also may be. She leaves us and many who are so glad to have known and loved her.