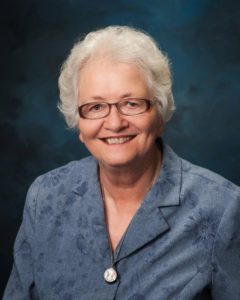 Sister Agnes was born in Panama, Iowa, on April 25, 1934. After high school, she entered the monastery in 1951. Earning a B.S. in education from Mount St. Scholastica College, she taught in elementary schools in Kansas and Missouri for 20 years and later did graduate studies in counseling and theology at Creighton University. Always devoted to the people of southwestern Iowa, she was part of the Covenant Monastery foundation in Harlan, Ia. After earning her clinical pastoral education certificate, she worked as a chaplain at Mercy Hospital in Council Bluffs, Ia. She also served on the Diocesan Pastoral Council for the Des Moines diocese and the Regional Pastoral Council in Council Bluffs, Ia. One of the highlights of her life was receiving communion from Pope John Paul II when he visited Des Moines in 1979. From 1987 to 1993, she was a chaplain at St. Joseph Medical Center in Ponca City, Okla. When she returned to the Mount, she did hair care and therapeutic massage and assisted at the Mount Conference Center and Sophia Center.

Sister Agnes was preceded in death by her parents, Sedona (Hoffmann) and Clement Honz, her brothers, Raymond, Donald, Edward and Dennis Honz and her sister, Rita Schneckloth. She is survived by her sister, Doris Jensen, her brother Wayne (Betty) Honz, and her monastic family. Becker-Dyer-Stanton Funeral Home (www.beckerdyer.com) is in charge of arrangements. Memorials may be sent to Mount St. Scholastica or made online at the Mount’s web site (www.mountosb.org).

On behalf of the community I extend condolences to Sr. Agnes’ sister, Doris; her brother, Wayne and wife, Betty; her sister-in-law, Rita; along with her many nieces and nephews, her classmates, Sisters Joan, Lucille and Rosemary in Dooley Center, Sisters Bernelda, Mary Rae, and Mary Benedict in the monastery, and Sr. Mary John at Benet Hill in Colorado. And I would be remiss if I didn’t mention her Iowa buddies, Sister Amelia Nowatzke and Sister Sylvia Kenkel in Dooley who were traveling companions to Iowa for many years.

The readings this evening speak of promise, hope, liberation and trust in the care of a loving God…comforting and reassuring words for Sister Agnes and for each of us. From the prophet Micah: “Come, let us go up to the mountain of the Lord, to the house of the God of Jacob; that he may teach us his ways and that we may walk in his paths.” Sister Agnes, tall and determined, came to the Mount from high school — to this house of God where with her 20 classmates began to learn about Benedictine life.  She carried herself in a “pius, holy manner with hands under her scapular as she walked” stated one of her classmates. After 20 years in the classroom, Sister Agnes ventured into pastoral care ministry where she “walked in the name of the Lord” sharing her faith, listening to stories, being a presence of comfort and hope.

Her brother and sister both told me about her visits to Iowa, how she enjoyed music, playing the piano or guitar, leading the kids in singing. On mission she taught music and gave piano lessons, played the organ and participated in choir as she did upon returning to the monastery. When staying with her sister she insisted on watching the Lawrence Welk show. She also enjoyed playing cards – the Friday night Golf game in Dooley where she would organize the table, move chairs and wait for the players to show up, as well as, daily gathering with classmates and friends in the community room after midday prayer.

In the letter to the Romans, St. Paul tells us that “suffering is the transition to the assured glory that awaits us all.” One commentator wrote “creation is on tiptoe with excitement” for this glory to be revealed.  As I read that I thought of Agnes trying endless times to get out of bed, putting her long legs over the bed railing in the ER room, attempting to stand up and get moving. Her suffering in mind, body and spirit is now ended.  Even in its midst, she could be gracious and compliant. The Spirit has liberated and freed her from all her worries and for that we rejoice.

The gospel of St. Luke’s message to his disciples and to us is simple and straightforward: do not have an anxious approach to life!  There is no need to worry about food or clothing and, for sure, don’t let anxiety control your life.  Instead, put energy into who you are to become not on what you have. In a third career, Sister Agnes wanted to become a massage therapist. She was quite determined to become one and drove weekly to KC for her training. Sister Agnes had been gifted with strong hands. Many Sophia retreatants and sisters were blessed to receive a massage from her. She volunteered her time at the Catholic Worker and the men looked forward to being a recipient of her gift.

“Do not fear” says St. Luke, put your trust in God who loves you. As a resident in Dooley, Agnes was the pray-er for the formation community at Marywood when I lived there. Everyone counted on her faith in God interceding for us. This past year she prayed for vocations, along with S. Gabrielle.  May she continue to be an intercessor for the community in bringing new members to us from her stance of now being in God’s eternal embrace of love.

As this pandemic prevents us celebrating with Sister Agnes’ family, friends and loved ones, perhaps, we are being invited to be on “tiptoe with excitement” as we await God’s glory to be revealed to us.  Let us stand tall be and be God’s image bearers to one another.