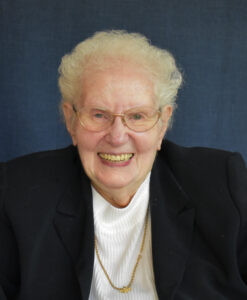 I grew up on a farm north of Axtell, Ks, and attended St. Brigit Church, which was a strong Irish American community.   My parents instilled in my 5 brothers, 2 sisters, and me the Catholic faith, the importance of education, an interest in current affairs, and care about one another.  With all the difficult times we had, family support and togetherness were very strong.

I taught in a rural school, as my sister had also done, and when I was in my twenties in 1954, I decided to join the Denver Franciscans, who taught the Native Americans on reservations in South Dakota.  My first assignment was to teach high school on the Rosebud reservation with the Ogalala Sioux.  It was the first time that I encountered racial prejudice and the strong Native American spirit. After many educational adventures, I became a principal at Red Cloud Indian School in Pine Ridge Sd, and at Marycrest Franciscan High School in Denver.  In the 1970s, I felt called to go into campus ministry and also to do some educational research into St. Brigit of Kildare, Ireland.  My ongoing education consisted of eventually writing my dissertation on St. Brigit.  My hope was to publish it someday as my advisor suggested.

I worked in campus ministry and did spiritual direction at state universities in Missouri, Colorado, and Oklahoma.  I felt called to study the mystics and then gave many retreats in Denver and at Sophia Center in Atchison, Ks.  I had prayed the Divine Office before I entered; and when I worked with the Benedictines in Atchison, I was very impressed with their prayer life and their devotion to the Divine Office. After much discernment, I was led to ask for a transfer to become a Benedictine.  I had celebrated 50 years as a Franciscan at Lillis, Ks.  I was deeply involved in Franciscan spirituality, and I felt a deep connection with the Benedictine spirituality.   In 2011, I became a Benedictine Sister at Mount St. Scholastica in Atchison, Ks.  I continued to offer spiritual direction and gave retreats at Sophia Spirituality Center.  To this day, I am enriched by weekly spirituality sessions with laywomen in the Atchison, Ks, area.