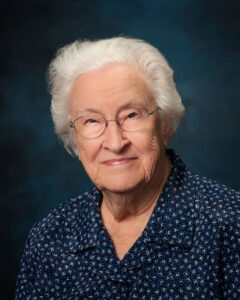 Sister Seraphine Tucker, OSB, 95, a Benedictine sister of Mount St. Scholastica, Atchison, Kansas, died Saturday, October 15, 2022, at the monastery. The vigil service was held October 20, and the Mass of Resurrection was celebrated October 21.

Environmentalist and scientist, Sister Seraphine Tucker was born in Beatrice, Nebraska, on June 27, 1927, one of four children of Casimir and Mary Margaret Carmichael Tucker. Her family eventually moved to Atchison, where her parents lived for the remainder of their lives and where she graduated from Mount St. Scholastica Academy and later from Mount St. Scholastica College.

A pioneer in early innovative tape teaching in the 1950s and 60s, she taught science and mathematics for 25 years in area elementary and secondary schools. She also earned a master’s degree in education. In 1972, she returned to the monastery to serve as maintenance director, where her expertise and interest in the natural world, home repairs, engineering and ecology made her a valued asset in every dimension of the community’s physical facility. After leaving the supervisory position, Sister Seraphine remained active in ecological activities, in managing a curriculum for training of childcare providers, and in tutoring and GED instruction.

Hardworking and energetic, she was always interested in ways to improve the environment and the care of the sisters. Sister Seraphine was preceded in death by her parents and by her brothers, James, Pat and William Tucker. She is survived by nieces, nephews and her monastic family. Arensberg Pruett Funeral Home is in charge of arrangements. Memorials may be sent to Mount St. Scholastica or made online at the Mount’s website.

Watch the Mass of Resurrection.

Reflection at the Vigil of Sister Seraphine Tucker

Sister Seraphine’s life first intersected with mine when I was 14 years old. I would not have imagined in my wildest dreams that I would be here doing this tonight. But every year, I have grown in my admiration and affection for her, especially during the two decades that I worked with her.

There can hardly be any better readings for this evening than those that refer to the great reward of the faithful and productive steward. Raised in a poor but determined and hard-working family, she spent her life making something out of nothing. Every talent she was given was appreciated, carefully tended and made to increase. On her dying day, some of the words people used about her were “mentor,” “model” “pillar,” “giant.”

Her fingerprints were probably on every inch of our buildings and grounds. She watched buildings go up, having been called to lead the maintenance department when Dooley Center was being built, and she watched them go down, as we sat in her room with a front row seat to the recent demolitions. Even then, she was commenting on the way the buildings were constructed and the materials that were being salvaged.

In this chapel, her name is inscribed in the commemorative plaque; in our everyday living spaces, there could be a plaque in every room, but we are usually unaware of the many ways she cared for them. Sister Seraphine would say, “When you see something to be done, you just take care of it.”

This industrious, but quiet and humble attitude is the mark of a faithful servant. She knew that none of this was about her, but about the One who had gifted her and asked for her service. It was not just things that she nurtured, but more importantly, people. She could sense the material or emotional neediness of a student and discretely give them the extra attention or encouragement they needed. She saved many people from themselves. Sister Seraphine would say, “No one knows how much social work goes on in this department.”

Other sisters were never to know which of the workmen was recovering from addiction or which of the after-school helpers had been referred from juvenile court. To this day, middle-aged men who mowed lawns for her when they were teens still ask about her when I see them in town.

After “retiring,” she taught in the Happy Hearts GED program where teaching the students math and science was secondary to teaching them self-confidence and encouraging them to improve their lives.

Her goodness was scattered abroad and given to the poor in countless ways. The scriptural images of the sower of seeds spoke deeply to her. She knew her biology, and often complained when we heard the gospel about the grain of wheat dying. Sister Seraphine would say, “The seed doesn’t die! It can’t grow if it dies. It’s still there; it’s just that its form is changed.” Indeed, she now knows the full meaning of that truth.

Isaiah speaks eloquently about how the earth brings forth its bounty, and our piece of earth was richly blessed by Sister Seraphine’s care. She was a serious environmentalist before environmentalism was recognized as critical. She was always studying and educating the sisters on organic agriculture, alternatives to every household chemical and ways to conserve energy. She was even able to convince professional engineers that she had figured out better ways to provide our heating and cooling.

Sister Seraphine would say, “The early sisters knew their ecology. Poor people understand the necessity of making the best use of everything.” We must honor her memory by taking the next steps in raising our consciousness and committing ourselves to changes in our lifestyle that will be a witness to ourselves and others of the crisis in our world with regard to responsible stewardship.

She would expect no less from us than that we strive to live well, live holy, live in harmony with our world and keep the talents multiplying. Often, her parting words to her workers were, “Procedamus in pace.” The yard boys had no idea whether she was praising them or putting a spell on them, but I knew it was the old Latin Mass dismissal blessing: “Let us go forth in peace,” and I felt its blessing whenever she said it to me as I was going on a  trip or starting a project or just getting my work tickets for the day.