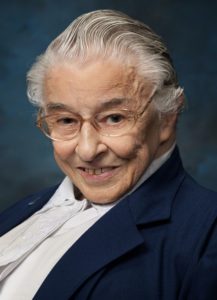 Sister Noreen (Georgette) Hurter, OSB, 89, a Benedictine sister of Mount St. Scholastica, Atchison, Kans., died Tuesday, August 29, 2017, at the monastery. The vigil service will be Friday, September 1, at 7:00 p.m. in the monastery chapel and the Mass of Resurrection will be celebrated there Saturday, September 2, at 10:30 a.m.

Sister Noreen was born in Cranford, N.J., on November 22, 1927, to Henri and Ruth Saunderson Hurter. After graduating from Mount St. Scholastica College in 1950, Sister Noreen entered the monastery, making her monastic profession in 1952. She enjoyed her years of teaching on elementary, secondary and college levels in Kansas and Missouri. She was a librarian at Mount St. Scholastica College and first librarian of Benedictine College and served for a year as academic dean at Benedictine College until being elected prioress in 1975. As prioress, she encouraged an ecumenical and international outreach, including concern for refugees, peace work, medical services and rural ministry. Leaving office in 1988, she spent six months at the sisters’ mission in Mineiros, Brazil. Later ministries included Mount development director, development and program director of the Mount Community Center, and principal of St. James School in St. Joseph, Mo. In her retirement, she was monastery librarian.

Sister Noreen was preceded in death by her parents and her brother Eugene. She is survived by a nephew, cousins, and her monastic family. Arensberg Pruett Funeral Home (www.arensbergpruett.com) is in charge of arrangements. Memorials may be sent to Mount St. Scholastica or made online at the Mount’s web site (www.mountosb.org).

It is good that we are here tonight to celebrate the life of a friend, a mentor. It is good that Michelle, Scott, Spencer, and Morgan are here. Over the years they became Noreen’s adopted family. It is good that all of you have come to be with us in community this night. I must begin by telling you that 20 plus years ago, Sister Noreen handed me an envelope with her funeral vigil reflection. She asked that it not be opened until her vigil and that I would read it when the time would come. Her request was honored and Sr. Esther opened it last week. And so…..I begin…..

“ As I write this, it is September 11, 1996. I have no idea, at present, when you will be hearing it. I have said many times that I would like to give my own vigil reflection….and here it is! This gives me the opportunity to reflect one last time with you about what was important in my life, as I saw it, and what I might like to share with you at this time.

It was 50 years ago this fall that I arrived in Atchison, having first heard that there was a Mount St. Scholastica in a place called Atchison from the Schirmer “girls.” Although I had already enrolled at the Mount in the Spring of 1945, I changed my mind about coming since I had obtained a position working for the Ration Board. My plans at that time were to finish College, return to New Jersey to teach Math and, if possible, to enter the Benedictines there. But God’s ways are not always ours as we’ve seen so often. On April 19, 1950, I had an appointment with Mother Lucy and asked to enter. She said “yes.” I’ve often said that when I’d get to Heaven I’d have a bone to pick with Mother (and perhaps, as you hear this, she and I have already had that conversation) because later I heard that she didn’t think “that one from New Jersey would make it back here.”

There have been so many events in my life that remind me of the plot of the book, The Bridge of San Luis Rey—why certain people are where they are at a particular time, involved in a happening that sometimes changes their lives. My chance going to the Academy in Elizabeth New Jersey, finding out about a place called Atchison, coming here, meeting the members of my class, entering with those I did and the experience on all the missions and areas of service in which I have been privileged to share—each event brings that reflection to mind and I see now how the Lord used each for His own special purpose.

I have asked that the quote from the prophet Micah be on my memorial card and you have heard me quote it often, “This is what the Lord asks of you, only this, that you act justly, that you love tenderly, that you walk humbly with your God.” (Micah 6:8)

This I believe, captures the fullness of St. Benedict’s words, “Listen to the precepts of the Master….” and reflects the meaning toward the fulfillment of His directives “To seek God.” (Ephesians 5)

This is the message I would leave with you. Nothing is more important than living those words, “that you act justly, that you love tenderly, and that you walk humbly with your God.”

In these words are summed up our purpose, direction, and final end in the fulfillment of the Gospel message and Benedict’s directives to us.

I have asked that the crucifix on my casket be one, carved by Sister Mary Frederick, which held a special place on the wall of the second (the inner) office for most of the twelve years during my time as Prioress. Sister Mary Frederick made it especially to represent, through the formation of Jesus’ hands, that there was a giving and receiving in all the visits, conversations, discernments, and reflections that took place before it. The giving and receiving were mutual with my receiving as well as giving in each of these encounters. Those moments were privileged moments for me as I often had the opportunity to witness the action of God within the hearts of those with whom I visited and I felt it to be an awesome moment in which to share. Those moments were, for me, very special times and perhaps the most important times of those years.  Many have gone on before me and some of you never sat before this image with me but shared similarly with other Prioresses and now, as you reflect on this crucifix, know that our lives must be that interaction of giving and receiving through the Body of Christ (John 6) and only with and in Him can community be truly attained.

Again, I say for the last time…This is what the Lord asks of you….only this…that you act justly that you love tenderly … that you walk humbly with your God.” It is good…it is very good …that each of us is here this night!