My life in ministry started the day after I finished the Novitiate.  In February 1958, I was asked to go to Council Bluffs, Iowa, to complete the year for one of the retired teachers.  Because I had some musical ability, I was then sent to several missions to take care of the church music in  Kansas, Missouri, and near Atchison.

After the Vatican Council, there was a need to begin using the English in the liturgy, so I was sent to St. Benedict’s to help the high school students with that project!

I grew from all those different experiences and challenges and was grateful and thrilled when I was asked to come home to teach in Atchison.  It was an exciting time, combining the three parish schools into one!  I worked as coordinator of the primary school, then in the intermediate school and later taught sixth grade at the upper school.

Another great adventure was in store, as I was asked to join the religious education office at the Chancery in Kansas City, Kansas. During those five summers, I attended St. Meinrad’s School of Theology, getting my degree in religious education.

From there, I began working with the RCIA in five parishes, combining them into one catechumenate. What a wonderful experience! At the end of each year, we had a BIG Gathering of all our new Catholics and their families, which culminated with the staff presenting a program on stage, for example, tap dancing, using puppets to tell stories, and mime.

In 1984, I felt called to join the group of sisters going to North Carolina to begin a new foundation for the Mount.  We went there as a response to the bishop, returning to the Mount after about a year. 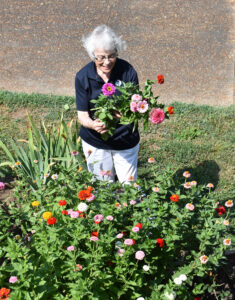 At Visitation Parish in Kansas City, Missouri, I served as a pastoral associate, with my main ministry being RCIA. Those were incredible years working with adults seeking deeper faith and connection with God.

Having earned a master’s degree in Christian Spirituality at Creighton University, I became Mount St. Scholastica’s director of initial formation and became the novice director for our new members.  After nine years of marvelous challenges and opportunities, I became a staff member at Sophia Spirituality Center.  I am still on the staff and find ministering at Sophia a great privilege.

I have loved all of these opportunities for being of service, but especially for the lifegiving gifts given me in the many wonderful men and women with whom I interacted.  Such a variety of ministries would never have been mine to share if I had not been called to this monastic community which is home to me in every way!