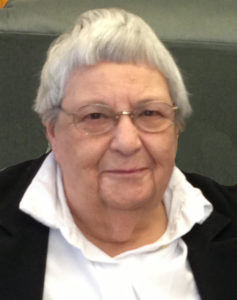 Sister Mary Owen Leutloff, OSB, 100, a Benedictine sister of Mount St. Scholastica, Atchison, Kans., died Thursday, June 6, 2019, at the monastery. The vigil service will be Tuesday, June 11 at 7 p.m. in the monastery chapel, and the Mass of Resurrection will be celebrated there Wednesday, June 12 at 10:30 a.m.

Sister Mary Owen was born in St. Anne, Ill., the only child of Mary and James Leutloff. After graduating from St. Patrick High School in Kankakee, Ill., she worked as a parish secretary and sacristan in Kankakee, Ill., and then as a bookkeeper in Hanover, Kan. She entered the Benedictine community of Mount St. Scholastica in January of 1946. She earned a master’s degree in elementary administration from Northwest Missouri State University and taught at parish schools in Defiance, Ia.; Atkinson, Neb.; and in Kansas at Westphalia, Valley Falls, Horton, Topeka, Wamego, Seneca, Marysville, and Kansas City for over 40 years. With her love of gardening and science, she worked in the monastery maintenance department after retiring from teaching, and also assisted in the monastery library. Her other interests included reading and various needlecrafts. She was able to enjoy a celebration of her one-hundredth birthday, April 29th of this year.

Sister Mary Owen was preceded in death by her parents and is survived by cousins and her monastic family. Becker-Dyer-Stanton Funeral Home (www.beckerdyer.com) is in charge of arrangements. Memorials may be sent to Mount St. Scholastica or made online at the Mount’s web site (www.mountosb.org).

It seems that whenever a person turns 100 years old, someone seems compelled to ask them the key to having a long life. One person may respond that she swam and did yoga while another says she did nothing other out of the ordinary. One says he didn’t drink or smoke while the next praises his daily whiskey and cigar. We all want to know the secret, but the secret is that there is no magic formula. There is only one thing that makes a person live 100 years – their heart kept beating.

The early Hebrews, before they developed belief in an afterlife, got it totally wrong. As we see in Proverbs and elsewhere, they thought of long life and riches as a sign of God’s blessing. But we all know very good people who have died young and some people who reach a ripe old age but whose behavior and lifestyle is just flat bad.

There is something, however, that recurs again and again in Scripture: those who desire wisdom and seek what is right will be happy and prosper in the true sense of the word regardless of how long they live. The key words in tonight’s readings are characteristics that Sister Mary Owen embodied: gentleness, pleasantness, peace. These virtues develop over the course of life, as Mary Owen and many other sisters have told me, by simply living one day at a time in attentiveness and obedience.

Sister Mary Owen and I (and Prinz the dog) shared an office for several years in the maintenance department. No big events happened there most of the time. Each day there, or in the classroom or the library or later in Dooley, Sister Mary Owen was attentive and willing to listen to needs and do the next right thing that needed to be done. Not only with people, but with the earth, there is the same need to see and do. She was environmentally conscious before that was a phrase, always eager to fix, repurpose, companion plant to avoid chemicals, and just put in the hard work to avoid waste. To be a master gardener, you have to understand that you do what nature tells you, not the other way around. You don’t choose the time to plant the bulbs or pick the fruit or winter the roses or prune the trees; they tell you.

The student reading a book, the sisters eating the apples or enjoying the beauty of the rose garden she tended by St. Anthony’s, hardly gave a thought to Mary Owen’s gifts to them. But that wouldn’t matter to Mary Owen because she would just, as St. Paul instructed the Philippians, “Keep on doing the things that you have learned and received and heard and seen in me and the God of peace will be with you.”

The gospel for tonight and tomorrow is one of the Good Shepherd passages, but with a twist. Since sheep in Jesus’s time were kept in a common pen, they learned from birth to recognize the voice of their particular shepherd so they could leave at the right time. Once they have that skill, there is no need to push or pull or poke or prod them. But Jesus takes the image one step further and calls himself both shepherd and gate. His sheep not only go with him but through him. All of the attentiveness, all of the obedience, the daily one foot in front of the other, opens into the heart of God himself. Each day the gate opens; each day we are invited to go through it. On her 100th birthday, when a sister asked her if this felt like a special day, she replied, “No, what matters is how you get there.” Indeed, this is the real secret of a good life, no matter how many days and how many heartbeats we are given.