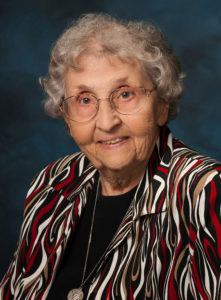 Sister Mary Joyce Meyers, OSB, 95, a Benedictine sister of Mount St. Scholastica, Atchison, Kans., died Tuesday, June 11, 2019, at the monastery. The vigil service will be Friday, June 14, at 7 p.m. in the monastery chapel, and the Mass of Resurrection will be celebrated there Saturday, June 15, at 10:30 a.m.

Sister Mary Joyce was born in Evanston, Ill., on June 27, 1923, to Harry and Barbara Schmidt Meyers. After graduating from St. Scholastica Academy in Chicago, she entered the Mount community in 1944. She taught math, English and science at high schools in Kansas, Colorado, and Missouri and was principal of St. Joseph High School in Shawnee, Kan., for ten years. She held a B.S. in math from Mount St. Scholastica College and M.A. in educational administration from Creighton University. She received the Soroptimist Outstanding Teacher Award and the Trustees’ Fellowship at UMKC. After earning her M.A. and Ph.D. in counseling at the University of Missouri – Kansas City, she worked as a marriage and family counselor at Catholic Social Services in Kansas City, Kan., until 1978. She was also a psychologist at Family Therapy Institute in Kansas City, Mo., for 27 years. She held membership in the American Psychological Association and the American Association of Marriage and Family Therapists. After her retirement, she volunteered at Keeler Women’s Center in Kansas City, Kan., and then assisted in the development office at the monastery. Last year, at age 95, she traveled to Philadelphia as one of the 10 outstanding senior Americans honored by LeadingAge, a national organization of non-profits serving seniors.

Sister Mary Joyce was preceded in death by her parents, by her brothers Harry and Richard Meyers, and sisters Geraldine Meyers and Barbara Perkowitz. She is survived by nieces, nephews and her monastic family. Arensberg-Pruett Funeral Home (www.arensbergpruett.com) is in charge of arrangements. Memorials may be sent to Mount St. Scholastica or made online at the Mount’s web site (www.mountosb.org).

It is with a grateful heart that I reflect on the life of my friend, Sr Joyce Meyers. Our hearts, our prayers, and our love surround her nieces and nephews, the students she taught, those she counseled, friends, especially the Forge family, and our monastic community.

In tonight’s first reading the prophet Isaiah tells us, “Everyone who thirsts come to the water.” This image of water was so instrumental in Joyce’s search for God. She not only wanted to come to the water, she wanted to drink of the living water and then share that water with those who were thirsty. In 1944, Joyce entered the Mount community and there she continued her search for God. Her first ministry was teaching high school math, English and science before becoming principal. Sr. Diana shared with me that Joyce would make sure that everyone was given the opportunity to learn even if this meant individual tutoring after school. She wanted everyone to succeed and be proud of their accomplishments.

She was a deep listener. Many clients spent time with her to be able to communicate effectively. I remember when I was a postulant, all of us in formation met with Joyce to be given the opportunity for an honest conversation with one another. Joyce explained to us the importance of using “I” language instead of saying “We.” To be responsible for our own thoughts, comments and most importantly to be respectful. She wasn’t letting any of us off the hook.

Like the disciples in tonight’s Gospel, Joyce loved fishing. I don’t know how many fish Joyce actually caught, but I believe her passion of fishing brought her closer to God. The wisdom she obtained while at the water she used to feed her own spiritual life and the spiritual life of others. While living with Joyce at Guardian Angels in Kansas City I was able to witness the joy that was a part of the preparation for the fishing trips. The gathering of nourishment, the cleaning, and restocking of the tackle box and finally the spark in her eyes. I could tell that fishing was a place of peace for Joyce.

Joyce continued to contribute in her retirement she volunteered at Keeler Women’s Center, Visitation Grade School, Mosaic Hospice and in our development office. It was sad for me to observe Joyce these past years when she struggled with her physical decline and the loss of her dear friend, Lee. Even though she remained optimistic her spirit grew weary.

When Joyce was told that there was nothing else, they could do to help her medically, she chose to be by herself for a while so she could spend some time with God. May she now be resting in His warm embrace.