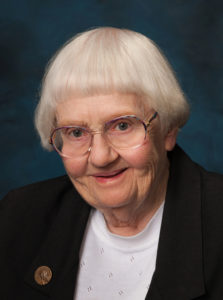 Sister Mary Ethel Burley, OSB, 97, a Benedictine sister of Mount St. Scholastica, Atchison, Kans., died Thursday, February 20, 2020, at the monastery. The vigil service will be Friday, February 21, at 7:00 p.m. in the monastery chapel, and the Mass of Resurrection will be celebrated there Saturday, February 22, at 10:30 a.m.

Sister Mary Ethel was born on August 29, 1922, the oldest of six children of Francis and Cora Marie Walters Burley. She entered the monastery of Mount St. Scholastica in 1942 and lived to celebrate the 75th anniversary of her monastic profession. The education of children was her lifelong passion. Even before coming to religious life, she was a rural school teacher for two years. Receiving her B.S. in education from Mount St. Scholastica College, she was an elementary teacher for 19 years. Later, with her M.S. in education from St. Louis University, she became a principal for another 29 years. Through her nearly 50 years in educational ministry, she served children in Missouri, Kansas, Iowa, Nebraska, and Colorado. In her retirement years, she continued to assist in various domestic services within the monastery.

Sister Mary Ethel was preceded in death by her parents, by her sisters, Maxine Bear and Mary Pedersen, and her brother Arthur Burley. She is survived by her sister Jo Mitchell, her brother Richard (Betty) Burley, nieces and nephews, and her monastic family. Arensberg-Pruett Funeral Home (arensbergpruett.com) is in charge of arrangements. Memorials may be sent to Mount St. Scholastica or made online at the Mount’s web site (www.mountosb.org).

On behalf of Sister Esther, our prioress, and the sisters of this community, I extend our sympathy and prayers to S. Mary Ethel’s sister, Jo, to her nieces and nephews, and other family and friends who have joined us, and to those family members who are unable to be with us, especially her brother, Richard, and sister-in-law, Betty.

Sister Mary Ethel, you have achieved your life-long goal! As you so many times sang the Nunc Dimittis at the end of compline, “Now, Lord, you can let your servant go in peace according to your promise.” (Luke 2:29) that prayer became your reality early yesterday morning. You went in peace, in God’s own time, where you now know forever the freedom of the glory of the children of God.

I have no doubt that Jesus welcomed S. Mary Ethel with open arms and said, “Well done, good and faithful servant.” She spent over 75 years doing the only thing she ever wanted to do, being a sister in this community. Her father even made her teach school before she came to the Mount to make sure she really wanted to be a sister!

Sister Mary Ethel was an excellent principal and teacher, well-loved by students and parents. She welcomed hundreds and hundreds of children in Christ’s name in her nearly 50 years as an educator and made sure that the school was always an inviting place for them to be. She is remembered by many of them even after all these years!

The reading we just heard from Sirach seems written with S. Mary Ethel in mind. She was one who was happy since she lived in the fear of the Lord. She knew that her support came from God even during times of “scorching wind or noonday sun,” however those were manifest in her life. She lived with her hope in the One whom she knew had saved her.

And how did we see this lived out in her life since Sister Mary Ethel was not one to go about proclaiming this in words? I believe she did it as Sirach says, the Lord “lifts up the soul and makes the eyes sparkle; he gives health and life and blessing.” Didn’t we all know that sparkle in her eyes that is captured so well in the photo on her memorial card? Wasn’t it her positive outlook, her hope and joy, that endeared her to us and to those with whom she came in contact?

When I was an affiliate and a young sister, it was by her life that she taught me so many things about community life and living.

When I was an affiliate and a college student at Northwest Missouri State in Maryville, Missouri, she was the principal at St. Gregory’s there. She welcomed me and my friends to the convent there for meals, to crack and pick out black walnuts, and even to help clean their house. Most of my friends weren’t Catholic, but that didn’t matter (even though we thought it probably would!). We were welcomed and that example taught me a lot about Benedictine life and hospitality.

When she was on mission in Seneca and I was on mission in Hanover, I experienced how she was usually the one who would take the initiative to organize gatherings of the sisters in the area for community discussions or a meal together—building community bonds among those of us on those small missions in northeast Kansas.

She showed me that friends are important in community and that it is good to spend time with them. When several sisters from Covington, Louisiana, joined our community, she was an example of how to enlarge the circle of friends…to welcome one who needed a new community.

She loved to bring joy to others. Her example showed that this does not have to be done in big or elaborate ways. It can be as simple as a homemade card, a bouquet of flowers that she raised, or a coaster that she had made by hand.

Sister Mary Ethel’s actions and choices reflected her commitment to community life, to communal prayer and Eucharist, to the common table, to her living group however small or wherever it may be, to lifelong learning —the heart of being Benedictine—to being and doing that what she wanted to do all her life.

On Monday when it became obvious that death was drawing near and sisters started keeping vigil with her, I went to see her after dinner. The last thing she ever told me was, “What a wonderful community this is!” “What a special place this is!” And I agreed with her! I’m sure she had no idea she had served as an example for me. She simply wanted to be a “sister” to me and to each of us! And that she was!

For 97 years, Sister Mary Ethel, baptized Frances Olive, waited with eager longing for the adoption, the redemption of her body. On Thursday her suffering and diminishment ended and she beheld the incomparable glory promised to the children of God. The request she made to God when she sang her Sucipe at her final monastic profession nearly 75 years ago, “Receive me, O Lord, as you have promised that I may live, disappoint me not in my hope!” was no longer an unseen hope but became a reality. God received this faithful servant.

Tonight, we who remain, rejoice with her and ask…S. Mary Ethel, pray for us who still wait in hope for the glory to be revealed. Amen!