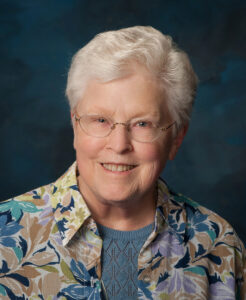 I grew up on a farm near Elsberry, Mo. After high school, I entered St. Joseph’s Benedictine Monastery in Guthrie, Ok, where my aunt, 2 cousins and sister, Sr. Marie Gerard, were already members. I taught elementary school, high school and was the elementary principal. I became a member of a new foundation of St. Joseph’s Monastery. When the foundation became independent, they chose the name of Sisters of Benedict and named their monastery, Red Plains Monastery.

I became a pastoral minister in several parishes, and in 1990 I was elected Prioress. Having missed a pilgrimage of American Prioresses to European abbeys of women because of 9/11, I received an invitation to teach English to African Benedictine women in Tanzania, East Africa, at Our Lady Help of Christians Community. I had a class of 21 Sisters from ages 21 to 50 as new secondary students. It was challenging but very fulfilling.  When I returned, I began teaching in the Spiritual Director Training Program, leading the practicum class. In 2009 after some years of research and visits back and forth with Mount St. Scholastica in Atchison, Ks, the Sisters of Benedict of Red Plains Monastery transferred our Vows to Mount St. Scholastica. We chose 3 laywomen to take over our ministries and completed our move to Atchison in 2012.

I continued to offer Spiritual Direction to interested individuals. I moved to Dooley Center in 2020 and still have a few directees.