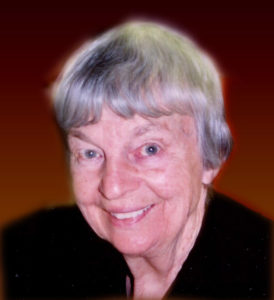 Sister Lucille was born to Jake and Gertrude Wiederkehr Borengasser in Fort Smith, Ark., on Feb. 12, 1928, the youngest of their seven children. After graduating from St. Scholastica Academy in Ft. Smith, she earned a bachelor’s degree in English from Dunbarton College of the Holy Cross in Washington, D.C. She entered the Mount community in 1951, making her monastic profession in 1954, and taught in elementary schools for several years. After earning a master’s degree in French from Notre Dame University, she taught art appreciation and French at Bishop LeBlond High School in St. Joseph, Mo., and Donnelly College in Kansas City, Kan.. She was later a chaplain at St. Mary’s Hospital in Kansas City, Mo., manager at the Marian Hall residence in Kansas City, Kan., and then pastoral assistant at St. Matthew’s parish in Topeka. On her return to the Mount, she worked in the development office and also wrote homilies for Celebration magazine. She was a member of the National Association of Catholic Chaplains.

Sister Lucille was preceded in death by her parents and by her siblings Rosalie Walsh and Charles, Sigmund, Basil and Margaret Borengasser. She is survived by her brother Jack Borengasser, by nieces, nephews, and her monastic family. Arensberg-Pruett Funeral Home (www.arensbergpruett.com) is in charge of arrangements. Memorials may be sent to Mount St. Scholastica or made online at the Mount’s web site (www.mountosb.org).

I would like to express my sympathy to Sister Lucille’s family, especially her brother Jack, her nieces and nephews, her high school friend Georgianne, and her classmates, Sisters Mary Rae, Mary Benedict, Bernelda, Joan Offenburger, and Rosemary.

Sister Lucille heeded Paul’s commendations to the Philippians: “Whatever is true, whatever is honorable, whatever is just, whatever is pure, whatever is pleasing, whatever is commendable, if there is any excellence and if there is anything worthy of praise, think about these things.”  She found a lot of things worthy of praise, including poetry, children’s stories, political news, classical music, people’s talents, her family, and community events.  Sister Lucille taught French and art appreciation at Le Blond High School and Donnelly College in her earlier years. Later she was a hospital chaplain and pastoral assistant.  She let her gentleness be known to everyone she ministered to, as Paul advised.

When she came back to the Mount, she served in the Development Office. She joined the porch poets and became an avid reader of a variety of books, especially the classics. She made a list of 10 books everybody should read. Unfortunately, I never saw the list, but I know she talked about Watership Down and Huckleberry Finn. She used to request older books from the public library and they would find them for her even without a card. She also enjoyed listening to Sister Maria Larkin and Sister Mary Beth read letters and articles to her and always wanted to know what was happening on the political scene, as well as community news in Threshold and Homelites.

As the Book of Proverbs reminds us: “Happy are those who find wisdom” . . . and “Her ways are ways of pleasantness, and all her paths are peace.”  Many of you will remember that Lucille’s religious name was originally Placid and everyone thought that name fit her well. She was always pleasant and peaceful until her eyesight failed. In her latter days she frequently called out, “Help,” because she felt afraid when she could not see what was around her. She liked to sit by the patio windows and listen to the birds and the people passing by who would greet her.

Sister Lucille was a wonderful example of the Benedictine virtues of humility and simplicity.  She gave away all she had and kept only a few books and sparce clothing. She was content with a black and white TV until she could no longer see it.  Sweets and snacks did not interest her.

Jesus’ words to the apostles were a great consolation for her: “I go and prepare a place for you. I will come again and will take you to myself.”  She looked forward to being at the Lord’s banquet where she could see him clearly, no longer hindered by the fog before her eyes.

May Sister Lucille delight in the Beatific Vision she now enjoys in her heavenly home, and may she know “the peace of God, which surpasses all understanding.” (Phil. 4:6)