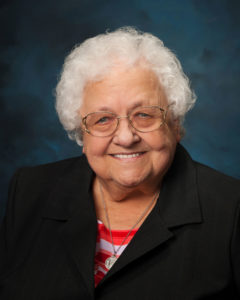 Sister Loretta Wiesner, OSB, 91, a Benedictine sister of Mount St. Scholastica, Atchison, Kans., died Monday, November 26, 2018, at the monastery. The vigil service will be Sunday, Dec. 2, at 7 p.m. in the monastery chapel, and the Mass of Resurrection will be celebrated there Monday, Dec.3, at 10:30 a.m.

Sister Loretta (Avila) Wiesner was born to Aloysius and Agnes Geist Wiesner in Ogallah, Kansas, the first of their six children. After graduating from Mount St. Scholastica Academy, she entered the Benedictine community in 1945 and made her lifetime monastic profession in 1950. She earned her teaching degree at Mount St. Scholastica College and a master’s degree in administration from the University of Detroit in 1973. During her 40-year teaching career, she taught at the elementary and secondary levels in Colorado, Kansas, Nebraska, and Iowa. She also served as principal at parish schools in Kansas at Frankfort, Mission, Atchison, and Nortonville, and in Salisbury, Mo. After retiring from teaching, she assisted in Dooley Center and the Helping Hand Thrift Store, and as a disburser of goods in the monastery until 2010.

Sister Loretta was preceded in death by her parents, a sister Marcelle who died in infancy, and her brother Robert. She is survived by her brothers, Earl (Agnes), Marce (Marian) and Del (Kay) Wiesner, sister-in-law Nancy Wiesner, and by nieces, nephews, and her monastic family. Becker-Dyer Funeral Home (beckerdyer@sbcglobal.net) is in charge of arrangements. Memorials may be sent to Mount St. Scholastica or made online.