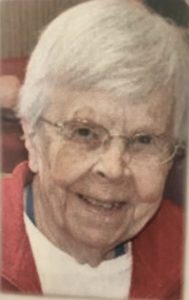 Sister Joan Taylor was raised in Kansas City, Mo., and entered the monastery in 1947. She spent more than two decades as an elementary and high school teacher in schools in four states before earning her master’s degree in library science. After that, she spent another two decades as a school librarian. She cared devotedly for her brother and parents for many years. Later Sister Joan became associated with the Little Sisters of the Poor and their care facility in Kansas City, where she spent the final years of her life. She has a sister in the community, Sister Mary Kathryn.