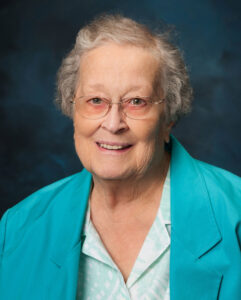 Sister Irmina (birth name Margaret) was born on May 28, 1926, in Atchison, Kans., one of seven children of Henry and Irmina Schletzbaum Miller. Graduating from Mount St. Scholastica Academy in 1944, she entered the monastery after high school and made her monastic profession in 1949. She earned a bachelor’s degree in education from Mount St. Scholastica College and a master’s degree in biological sciences from St. Mary’s University, Winona, Minn. She taught in elementary and secondary schools for over 40 years. While already teaching in Colorado, Sister Irmina became a charter member of Benet Hill Monastery, founded by the Mount in Colorado Springs, Colo., in 1965. There, she also served as a horticulturist and caretaker of 30 acres of forest. After 30 years of ministry in Colorado, she returned to Atchison. During her retirement, her jellies, stuffed clowns, and Raggedy Ann dolls were popular items in the monastery gift shop.

Sister Irmina was preceded in death by her parents and by brothers John, Leo, Eugene and Louis Miller and sister Mary Cecilia Patton. She is survived by her sister Alberta Prohaska, by nieces, nephews, and her monastic family. Arensberg-Pruett Funeral Home (arensbergpruett.com) is in charge of arrangements. Memorials may be sent to Mount St. Scholastica or made online at the Mount’s web site (www.mountosb.org).