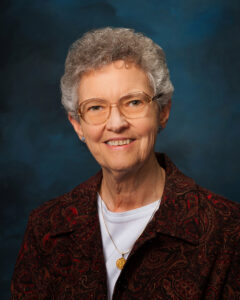 My parents came from a Baptist background, but we did not participate in a formal church. I was the youngest and had a brother and a sister. When I was ready for second grade, my parents decided to send me and my older sister to a Catholic grade school, as it had a really good reputation. The minute I saw my teacher, a Dominican Sister in full habit, I decided that I wanted to be a sister too.  After a couple years, my sister asked if she could be baptized a Catholic. My parents were ok with that, so she entered the Church.

When my father got out of the U.S. Navy in 1946, we moved to California. I attended Catholic schools in Hawthorne, Lennox, Inglewood, and then in Los Angeles, which was staffed by Franciscans.  One day my teacher asked if anyone wanted to become a Catholic. I was the only one who raised a hand. Then we moved again. At the new school in Los Angeles, I asked my parents  if I could take special instructions on Saturdays in order to be baptized. They explained that it was my decision and would become my responsibility to do all that the Church asked. So when I was 11 years old, I became a Catholic and  attended Mass every Sunday by myself because my sister had moved back to Kansas City.

Soon after that, we returned to the Kansas City area, and I finished grade school with the Sisters of St. Joseph as my teachers and then attended a high school taught by Benedictines. I was very shy, and switching to so many different elementary schools had made me even more so. I didn’t know when I was ever going to share with anyone my desire to become a sister.

So I devised this plan: during my freshman year, I would pray about it; during my sophomore year, I would share my desire in confession to a priest; during junior year, I would tell one of my Benedictine teachers; and during my senior year, I would tell my parents. Thoughts about my vocation stayed with me during those four years, but I got to the end of my senior year and had taken only the first step in my plan. I had prayed a lot. In late May, the school band of which I was a member took a field trip to Atchison, Ks, to play and march at Mount St. Scholastica. After our performance, Sister Mary David, who taught at my high school, approached me and asked if I wanted to go see the Mother Superior about entering the convent. I replied “Yes” without any hesitation. Dressed in my band uniform and carrying my slide trombone, I had my interview with Mother Alfred, and she said I could come on June 13, less than a month away!

I went home and that night told my parents what I wanted to do. They told me that they wanted me to be happy, and if that was what I really wanted to do, it would bring happiness to them also. So I entered the Benedictine community of Mount St. Scholastica on June 13, 1953. I was 16, but just a month from turning 17.

In my religious life, I have taught in primary, middle, secondary, and college levels.  I also served in Brazil as a missionary for about 8 years. I am now living at the monastery in Atchison and help serve in the business office as well as do other tasks assigned to me.

What I love the most about this life in community is praying together at our morning and evening prayer.