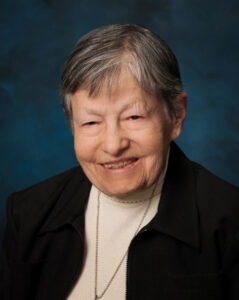 Sister Elena was born in the village of San Gabriel, Mexico, on Sept. 5, 1920. When her mother died, she got a job in a clothing factory in a nearby city to help the family. Having always loved her faith and desired religious life, at age 30 she accompanied some Benedictine sisters to Alabama and then went to Oklahoma in 1956. She was determined to receive an education, which culminated in a B.S. in secondary education. In 1977, she became a pastoral associate for the Hispanic community at Our Lady of Guadalupe Church in Hollis, Oklahoma, serving there until 1993. After the move of her Red Plains Monastery community from Piedmont, Oklahoma, to Atchison in 2009, she continued to sew, care for her beloved parakeets, and make beautiful crafts for the monastery gift shop.

Sister Elena was preceded in death by her parents, Adelaida and Juan Hernandez, her brothers Juan, Pedro, and Alfonso, and sister Carmen. She is survived by nieces and nephews and her monastic family. Becker-Dyer-Stanton Funeral Home is in charge of arrangements. Memorials may be sent to Mount St. Scholastica or made online at the Mount’s web site.

Reflection at the Vigil for Sister Elena Hernandez

“Blessed are you among women… And blessed is she who believed that there would be a fulfillment of what was spoken to her from the Lord.” These two lines from the Gospel tell the story of Sister Elena’s life again and again. Elena’s family believed that when God came first, good things will follow. Celebration of Saint’s Days, the Virgin Mary, and many other festivals was the normal routine of the Mexican people. Elena grew up thirsting for things of God. She was no ordinary child. Her imagination and resourcefulness grew without end, sometimes to the consternation of her parents. From an early age, Elena was asked by her family to be a woman of great faith. Her first  “yes” to the Lord came around the age of five, when Elena was placed in the role of taking care of her siblings. Before Elena turned five, seven of her siblings had died, and Elena said, “Each time my mother lost a child, she found it harder to take care of us because of her own grief.”

In her early teens Elena once again said “yes” to the Lord and to her commitment to her family. She and her aunt watched her mother die. Elena stepped into the role of taking care of the younger siblings and the household needs. Elena left formal education around fifth grade so that she could help her family financially.  She was a seamstress and, during her lunch time, she would teach the young people in the area about God.

Elena’s words of wisdom her whole life, and at her 100th birthday, was this mantra: “Listen to God and follow your heart.”  Elena, since the age of ten, had felt God calling her to be a “sister-in-the-church.”  Around the age of 30, some Benedictines from Alabama came and talked at her parish in Mexico.  She immediately let her desire be known and, in two weeks, found herself in formation. In 1958, she pronounced her vows and lived those vows for 63 years.

In 1979, Elena answered yet another “yes” when she served the Spanish parishioners of Hollis, Oklahoma. She was their educator, evangelist, spiritual director and friend. Her love of Christ brought much joy and peace. She was gifted by the community with lifelong friends, which included her periquitos — who, as she said, were both Catholic and bilingual.

In 2009, Elena was asked to say “yes” once again. She, with her sisters from Oklahoma, transferred her vows to Mount St Scholastica in Atchison, Kansas. We have been blessed by her presence.  Her love of news, nature, and church kept us all informed during the pandemic.  Elena enjoyed life to the fullest and was a little feisty at times.  Her response to my attempt at making her enchiladas on her birthday was, “You tried.” She also shed many tears; one of those times was at the death of her 100-year-old companion, Sister Cyprian Vondras.

Isaiah 25:9 reads, “… Lo, this is our God;…we have waited for him, and he will save us…” Elena waited for a long time to see her God. May each of us be as patient. Elena, Descansa en Paz.