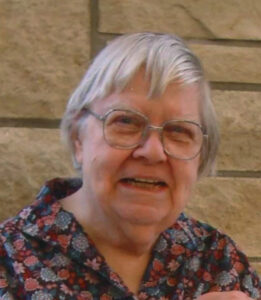 Sister Cyprian was born on Sept. 19, 1920, the oldest of the six children of Frank and Rose Hosek Vondras of Chicago, Illinois. Before entering Mount St. Scholastica, she worked as an order filler, maid, and child caretaker. After entering the monastery in 1942, she earned her B.S. in education at Mount St. Scholastica College. A primary teacher for 27 years, she taught in Kansas, Missouri, Nebraska, Iowa, and Colorado. After her retirement from teaching, she worked in various services at the monastery as a cook, seamstress, sacristan, and supervisor of housekeeping. Her knitting, crocheting, and embroidering, which she was still doing at the age of 100, produced beautiful items for community sale and earned numerous ribbons at the Atchison County Fair, even after she had lost the sight in one eye

Sister Cyprian was preceded in death by her parents, by her sisters Eleanore Kozenski and Rita Lewek, and brothers William and Paul Vondras. She is survived by her sister Lorraine Vondras and by nieces, nephews, and her monastic family. Becker-Dyer-Stanton Funeral Home (www.beckerdyer.com) is in charge of arrangements. Memorials may be sent to Mount St. Scholastica or made online at the Mount’s website (www.mountosb.org).

Tonight we come to say goodbye and thank you to Sister Cyprian Vondras, who joined the community on June 1, 1942.  When we went into quarantine in March, I knew the days would be long for Sister Cyprian, so I asked her to write her life’s story since the majority of the community do not know anything about her early life.  I now will try to tell her story as she wrote it to me.

Sister Cyprian’s Biography in Her Own Words

Can a person tell all that happened in 100 years?  Sr. Margaret Ann thinks that is possible, so this is my story.

My parents, Frank Vondras and Rose Hosek were married in November 1918 in Chicago, Il.

After World War I, there were few jobs open.  My dad got work in a candy factory until it went bankrupt.  Poverty rose to a new high, so my parents depended on food and shelter from relatives.  To make matters worse, I came in September 1920.  Grandma Hosek came to take care of me and helped me become a nice bounty, short-winded baby girl.  It was all old school as the language was all Bohemian.  Soon it was time to start school, and the Bohemian school was six miles away.  There was an Irish school two blocks away, so I was sent there.  Somehow, I learned English by listening, phonics and help.  I also learned to read.  Reading became my lifesaver.  There was a lot of sickness in the school, so I missed so much that I had to repeat 2nd grade.  I enjoyed school and would work in the library after school.

High school went along smoothly for two years; then all schooling stopped for me.  My sisters wanted an education also, so I took care of my sisters and brothers, did the cooking, cleaning, and all I could to help mom.  Later mom got me a job working in a drug, cosmetic company shipping room for five years.  From there, I entered the convent on June 1, 1942.  Sister Wenceslaus, my mother’s sister, was a great influence in my life.

There were twelve of us in the class; and with prayers, classes, working in the laundry, and cleaning we were pretty busy.  The six months went very quickly, and the day arrived for us to get the habit and a new name.  We were then sent on a mission immediately.

Sister Wilma and I were sent to Seneca.  There were twenty Sisters already there.  The next morning we all went to Mass, and then I was to teach 1st grade.  I had no idea where the classroom was, but there was a little boy playing in the yard, so I asked him where the 1st grade classroom was.  He said it was in the basement of the Church.  That began my teaching career.  I guess I wasn’t a total failure because Sister Mary Beth Niehaus is a product of that year.  I taught 1st and 2nd grades from 1944 to 1971.  I taught in Seneca, Baileyville, Kelly, and in Kansas City, Ks.  It was while I was in Baileyville that I taught myself to knit which I continued until I started to crochet and continued the rest of my days.  I gave many of my things for the Night of Dreams, for the poor, and just to give away.

At this time, I was asked to go to St. Anne’s in Prairie Village to be a cook for Msgr. Curtin, the Chancellor of the Diocese.  It was a very interesting two-year experience.  Next, I worked in the convent kitchen fixing trays for the sick and helping with the cooking.  When they were building Dooley Center, I was asked to work in housekeeping.  Vivian Jones was in charge, and the maintenance did a lot of the heavy lifting.  I worked in housekeeping until I retired and moved to Dooley as a resident.  And now I am 100 years old.  I have had a very good life.  My story.

I had the pleasure of being Sr. Cyprian’s companion for almost eight years thanks to Sister Loretta McGuire asking me to take over for her when she became the Pastoral Care Director.  We became very good friends, and she was a great inspiration and example to me.  She suffered very much in her life due to heart and lung problems, loss of her eye to cancer, loss of hearing, and difficulty in walking but never complained or gave up.  Her remedy for all was “Get a hobby,” which she did.  She loved to read, work her puzzles, and do her crocheting.  Her prayer life and community were most essential to her.  She was very faithful in writing to her sister and family every week or more often as she wanted.  She was grateful to everyone for any kindness, help, or gift to her.  She will be missed.

In the prologue to his rule, St. Benedict asks a question from the Psalms: “Who is the one who desires life and longs to see good days?” The prologue is wisdom literature, just like the Book of Proverbs, the source of this evening’s first reading. The basic question of all wisdom literature is “Who wants a good life?” Sister Cyprian certainly did and took the advice for finding that good life. She could easily have written her own book of proverbs and they would have very much resembled biblical ones.

Wisdom literature tells us that true happiness is not about fame and fortune. Living the working-class life of gritty industrial Cicero, Illinois, doing the kinds of service jobs one could do without a high school diploma, fame and fortune may not have been within her reach, but happiness would always be. And she got a little fame besides as she accumulated her county fair ribbons and the accompanying publicity.

Scripture also instructs us to always listen to God and follow that voice. True wisdom was found in her strong Catholic family and her education in her faith, and she was drawn to seek the good life that she saw in her aunt, our Sister Wenceslaus.

I’m sure she totally agreed with the words from Proverbs in tonight’s reading: She does her work with eager spirit. Receiving her high school and college education was an effort but she did the work. Facing a room full of first-graders every day for nearly 30 years requires a particularly eager and enthusiastic spirit.

She is clothed with strength and dignity, says Proverbs, and you don’t get to be 100 years old without strength, outer and inner. But the best part of this proverb is the second part of the sentence: … and laughs at the days to come. Her hearty chuckle persevered to the end. Life didn’t scare her; death didn’t scare her, because she lived in the promise of tonight’s gospel: “You did not choose me but I chose you.”

Proverbs continues: Acclaim her for the work of her hands. Her works were prolific: teaching, cooking, handwork. Everyone knows how she would have supplemented this proverb with “Have a hobby!” Her works were impressive, but it is more about how and why she did them. She knew that the works of our hands are a way to keep active and engaged, to bring pleasure to others, to turn outward from thoughts of ourselves, ignoring loss and focusing instead on what we have to give. Says Jesus: “I appointed you to go and bear fruit, fruit that will last.”

Sister Cyprian’s greatest bit of wisdom, then, would be to be grateful! She knew that, as Revelation tells us, “He will dwell with them; they will be his people.” In everything, she saw the presence of God and nothing ever kept her from maintaining an attitude that celebrated that presence. Recently, when Sister Elizabeth played her violin in Dooley Center, Sister Cyprian came to her afterward and said, “You know, I can’t really see you and I can’t hear you, but I could see the joy in the sisters and I could watch your graceful movements, so I really enjoyed it anyway. Thank you so much for coming.” For her, there was no thought of stopping that sentence after “I can’t see or hear you.” Her thought always went beyond the negatives to find the positive and to be grateful.

Few of us who long for life will have such a long life, but we can all long to have good days, however many they are, grateful for each one we have and what we can joyfully draw from it, as Sister Cyprian’s wisdom taught us so well.