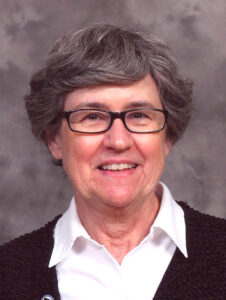 Nurtured in a Catholic family and growing up in Wymore, Nebraska, I attended public schools until coming to Mount St. Scholastica College. After earning a degree in the social sciences, I entered the Mount community. I began teaching at the elementary and secondary levels in Colorado, Missouri, Nebraska, and Kansas. After receiving a master’s from the University of Tulsa in behavior and social psychology I became an instructor at Donnelly College.

In the 1980s, I was on the staff at Shalom Catholic Worker House, a 24- bed shelter for homeless men in Kansas City, Ks., providing hospitality and peace education. I also taught the Catholic position on peace and non-violence in local parishes. I later served as a consultant for the Peace and Justice Office of the Archdiocese of Kansas City, Ks. from 1990-2003.

I served as associate director of Keeler Women’s Center in Kansas City, Ks., which provides programs and services for inner-city women. I also began weekly classes with the women in the Wyandotte County Adult Detention Center. The jail sessions continued in the local jail after moving to Atchison in 2016.

I’ve had quite a diversity of ministries, each special in different ways. My Donnelly College years were a growing time for me. The Shalom Catholic Worker years taught me a lot about myself and the suffering of so many others. Keeler Women’s Center challenged me to develop a more listening heart and to slow down.

I am grateful for the blessings of my monastic vocation. One for which I am perhaps most thankful would be the wonderful people who have crossed my path. I feel especially blessed for having met so many very holy people. Some of these are sisters; others would be considered by some as the very least among us.