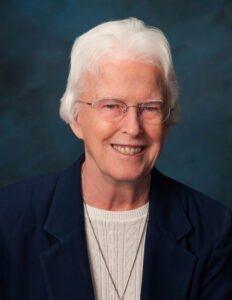 Sister Alice was born in Atchison, Kan., on December 16, 1932, to Joseph and Helen Hayes Brentano. After graduating from the Mount Academy, she entered the monastery of Mount St. Scholastica in 1950. She received her B.S. in education from Mount St. Scholastica College and her M.S. from Creighton University in Omaha. She taught in elementary schools in Kansas, Missouri, Iowa, and Colorado for 15 years and then served as a principal in several Kansas City and Topeka Catholic elementary schools over the next 30 years. On her return to the monastery in 1995, Sister Alice worked in the monastery’s business office until 2009 and assisted part-time as needed there until recently.

Sister Alice was preceded in death by her parents, her sisters Bernice Barnett and Helen Wack, and brothers Joseph and John Brentano. She is survived by nieces, nephews and her monastic family. Arensberg Pruett Funeral Home (www.arensbergpruett.com) is in charge of arrangements. Memorials may be sent to Mount St. Scholastica or made online at the Mount’s web site (www.mountosb.org).

Greetings from afar and so near.  I am Sister Gabrielle Kocour, a longtime friend of Alice Jean Brentano.  Our lives go back to high school days.  We entered in June, 1950 and shared our life stories on many occasions throughout those 70+ years.  As I reflected on the Scripture readings from Sirach, the Letter to the Romans and the Gospel of John, I decided to underline what I thought fit Sister Alice.  There were so many, I had to choose just a few.

The Book of Sirach invites us to look at those life stories which define Who we really are.  Alice was blessed with a strong loving Irish Catholic family,  Joe Brentano and Helen Hayes, her parents and siblings, Joe, Berniece, Helen Marguerite and John all who are enjoying the heavenly kingdom.  Her nephew Jeff and her niece Kathy and other nieces and nephews continued to be a loving support , a shelter from a scorching wind and a shade from a  noonday sun as Sirach describes it.  From that foundation, and access to God’s grace on which she stood, God truly lifted Alice’s soul and made her eyes sparkle giving her health and life and blessing for these nearly 88 years.

With that kind of life story, Alice could share the glory of God.  And she did… simply by being herself.  She had 2 aunts in the Mount St. Scholastica community who had spectacular talents, Sister Bernarda and Sister Mary Theresa Brentano.  Alice did not try to emulate them, she knew that if you can’t be a highway just be a trail. If you can’t be a sun be a star.  She spent her ministry years, teaching, administrating as principal and as bookkeeper in our business office.  Be the best of whatever you are seemed to be her motto.

I want to share a story, Alice and I heard in a retreat that is also written in some early chronicles of community life in a Jewish community.  This community was getting very old and they began to wonder if they could face the future without a host of young members.   So the abbot went to the forest to fast and pray and ask the Lord just what to do.   There he received a message from an angel who told him to go back and tell the monks that one of them is Christ Jesus.  The abbot returned and told the story and immediately the monks started to look closely and listen attentively to one another.  They were very kind and thoughtful.  They tried to be patient with one another.  Each person respected the rights of       the other.  They became a loving community and they began to flourish.  Many people wanted to join their community.  Perhaps they continue to this day.

Alice took this story to heart.  No matter what she did, she truly loved the people she encountered.  She listened so carefully, you felt like you were the Only one who mattered.  She must have had a lot of faith because many would try that faith in those relationships.   I think she really saw Christ in each one.  She saw the glory of God revealed and that brought hope in our lives, as St Paul says in his epistle.

Now this leads me to my last story which I experienced shortly after Alice died.  It was Holy Saturday and I went to St. Lucy’s Chapel and the tabernacle door was open , No Jesus. With tears in my eyes, I said Jesus, where are you. ?  Alice just died and we are in mourning.  I listened and I heard so clearly.   Gabrielle, Alice and I are out and about.   We are knocking on people’s doors and tapping people on the shoulder,  visiting with the neighbors and anyone we meet.  Are you telling them, You have risen,  I asked .   NO, Jesus said, that is obvious.  I am telling them, NOW, You are Christ,  I’m anointing you to go forth and be Love in this world…..     That takes away my breath, I said, breathlessly….and Jesus answered,   I’ll be sending you some Breath of the Holy Spirit.  Remember like Alice, Let God abide in you and you in God.  God’s  love has been poured into your heart through the Holy Spirit that is given to each of you.   Maybe that is why Alice Jean blushed so easily,  She experienced God’s love flowing through her.