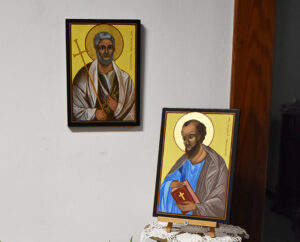 Tomorrow’s feast of Sts. Peter and Paul marks the two apostolic pillars of the Roman Catholic Church. Pilgrims from around the world journey to Rome to celebrate with the Pope, and with their newly appointed bishops who receive their pallium at the Eucharist in St. Peter’s Basilica. There is a tangible and profound excitement throughout the city with many displays of fireworks which conclude the day’s festivities. Twenty years ago, as a participant in the Rome Renewal Program, I, along with many of the other Benedictines present, experienced the universality of the Church that was both remarkable and amazing. The excitement was real.

While these two saints, first century Jewish men, are linked together as pillars of the church, they could hardly have been less alike. Peter was a rural, Galilean fisherman from Capernaum.  Paul, on the other hand, was an urbanite from the Cilician city of Tarsus. Peter, a Palestinian, Aramaic-speaking Jew probably was not literate; only knowing the Hebrew Bible from hearing the Pharisees teaching in the local synagogue. Paul, who knew Greek and Aramaic, along with reading Hebrew, studied in Jerusalem with a famous Pharisee, Gamaliel. Peter, we know was married and Paul was either widowed or unmarried. However, both men have remarkable vocation stories and they each have a deep faith in Christ, the Son of the living God, which, in due time, takes them to Rome and their martyrdom.

In the passage from Matthew’s gospel which we just heard, Peter’s confession of faith proclaims Jesus as Messiah, the Anointed One. His declaration was a revelation from God. Jesus’ response is: “you are Peter and upon this rock, I will build my Church.” Peter then receives the keys to the kingdom of heaven which grants him authority and an escape from the power of hell. When Jesus is facing death and suffering emotional anguish, Peter’s faith fails him. Thus Jesus challenges him, as sung in our antiphon, “if you love me, Simon Peter, feed my lambs, feed my sheep.”

Tomorrow’s second reading is a farewell address from St. Paul to 2nd Timothy. Paul is mindful that persecution/martyrdom is drawing near. His focus is on finishing the race, not necessarily winning it. While keeping the faith, Paul is now awaiting “the crown of righteousness.” Paul gives God credit for all that has been accomplished.  He is quite aware that it is God who was his companion, who strengthened and preserved him along the way. Paul ministered to the Gentiles and his letters are a great testimony to this faithfulness from God.

There is no doubt that Peter loved Jesus and followed him to death on a Cross. Paul felt himself “poured out like a libation,” living the death of Jesus in his own body so that he might glory in the cross of our Lord Jesus Christ.  Through both of these apostles, Peter, the rock, Paul the prophet, we have come to know the Lord’s saving power.  In an article by Fr. Columba Stewart, OSB he asks the question: “What are the lessons this feast grants to us?  Surely, it is no less than their love, their service, their faithful witness, and their total sacrifice.” Oh yes, and for me, I am grateful for my fond memories of celebrating with other Benedictines in Rome on this feast! (Some of you are in this chapel!)